Amidst recent debate over whether the “blockbuster” art show is dead, alive, dying, waning or mutating, it takes a blockbuster to appreciate the value of a blockbuster. This is especially so in Australia, whose several fine museums all started collecting way too late to acumulate many of the great masters. As Edmund Capon said in a recent interview, the quirky array of names along the sandstone frieze of the Art Gallery of New South Wales — Raphael, Michael Angelo (sic), Bellini, Titian — are aspirational, a list of all the artists whose works “we don’t have.” He didn’t add that we never will have them, but there is a poignance to that list of names in bronze, a reminder of one “tyranny of distance” which was untraversable at the time of the gallery’s construction and remains so. Whether or not one of Australia’s mining billionaires ever finds the taste and generosity to buy one of our public galleries some minor Titian, Capon, retiring after thirty very successful years as director of the Gallery, can now justifiably brag that he leaves it “full of Picassos.”

If a person did come to understand the true nature of reality and the universe, why we exist and die and how we exist after, if they could answer in one the curious person’s every “why?” in the endless chain, could that thought even be solidified into words? or even rarefied into music? If it could these words would at best be the ultimate “inarticulacy of the new”; or if this person glanced off some truth tangentially and put it into words they would sound like a madman or a prophet or at best a poet. Is music any more articulate than words here? Music is more articulate perhaps in its being more akin to the primary “image” of a thought before it is put into words — prose words anyway — it need not commit itself to one of the set of concrete objects or abstract concepts allowed by language. Then again I don’t want to do language a disservice since it can deal in these images, especially in poetry, and anyway music is like language in that there is a certain grammar of sounds which make musical sense; an infinite freedom amongst all the audible sounds would lead to infinite chaos, or at least just bad music. This is not how music evolved in any case, but instruments can say things outside of words’ ken (and vice versa).

It has been a terrific pleasure, since the launch of the Berkshire Review on September 24, 2007, to provide you with a steady flow of commentary on all the arts all around the world, wherever one of our writers happens to be, without concern for the financial underpinnings of the initiative. I have been supporting our ongoing work with my own funds, and our contributors write as volunteers. It has been a pleasure to watch our readership grow—in the immediate way only online stats can provide—to receive your words of appreciation, and to discover talented, expert writers of all ages, sometimes among friends and colleagues I have known for years and sometimes in unexpected, even somewhat surreal, ways. I hope you have enjoyed the Berkshire Review (and its sister publication, New York Arts) as much as I have. 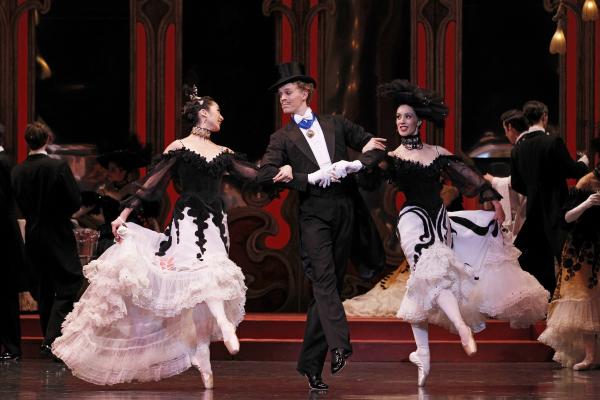 The Merry Widow as a ballet was invented by the Australian Ballet and it has their spirit written all over it: irreverence without sarcasm or cynicism, joie de vivre and any feelings of desperation generally surmountable. It was Robert Helpmann’s brainchild, the Australian actor and dancer who got his launch in the 1930’s in Ninette de Valois’ Sadler’s Wells company becoming a very fine dancer especially in the character and demi-character rôles and a legendary Shakespearean actor too. The idea to make the famous operetta into a ballet came in 1975 when Helpmann was the Artistic Director and the Australian Ballet was only 13 years old and in a bit of a financial pickle. The Merry Widow on the one hand was created to be popular and bring in some money from the box office and succeeded in this, but it was really a very ambitious and visionary idea for it was the company’s first new full length ballet, a genre Ninette de Valois, speaking from experience, emphasized as very important for a growing company to undertake — in the full ‘three act’ ballet in the imperial Russian and earlier French tradition a company must tell a single story over an entire evening. The way Hynd, Heeley and Lanchbery went about putting the idea on the stage goes far beyond mere populism which they knew wouldn’t have helped the young company at all.

Joanna Gabler will be exhibiting her most recent works in the David and Joyce Milne Public Library in Williamstown during the month of November.

Joanna Gabler is a painter, photographer and digital artist who has lived and worked in Williamstown over the past 9 years and exhibits online as well as locally, in New York, and in Warsaw, including her most recent exhibition of Orchid Mandalas in Warsaw University Botanical Garden this past September.

As an avid walker and photographer she became totally immersed in the beauty and splendor of the Nature in Berkshires and spends many happy hours walking in the woods and taking pictures. The result comes as a several thousands of photographs in her archive and a new way of working on her art, which she developed.

She describes it as painting with photography and calls her images “transcapes,” or transfigured landscapes.

The audience poured out of the auditorium, through the lobby, and out into the parking lots with such a happy general purring that it seemed villainous to criticize the brave new entertainment Peter Gelb has brought the world. For almost five years now we have been able to watch High Definition video projections of performances at the Metropolitan Opera in movie theaters and auditoriums like the one at the Clark Art Institute, which I had just vacated. HD Live, as it’s called, has become a hit in most places, I hear—certainly in Great Barrington and Williamstown, where I’ve seen them, mingling with a dense, enthusiastic, mostly mature crowd. It’s often harder to get a ticket to one of these projections than it is to get a seat at Met itself.

What could be more commendable than creating a show that provides so much enjoyment? It brings opera to a vast global audience at reasonable prices, and at various times in the past half-century many have feared opera was in danger of dying out altogether, either from the expense of production and operation or the sheer irrelevance of its elitist origins. The Met opera broadcasts, which began in the early 1930s, changed many lives and, in synergy with the Metropolitan Opera Guild and Opera News, helped raise significant sums of money for the Met during the Great Depression, when the house desperately needed funds and people needed cheap entertainment. Are the times not similar today? The broadcasts only created more opera-lovers, and what possible harm could they do? (Actually I know of one example, but I’ll leave that for another time.) Wouldn’t the HD transmissions, with their spectacular images and vivid sound bring even more good into the world?

There is fascination here—on many levels. “Within these grooves”, I am tempted to say, though one’s gratitude this time is for the cleaning crew. Pristine has already given us some remarkable technical restorations of the Furtwangler discography. Encountering now these listenable and vivid performances by Sir Edward Elgar, recorded into acoustic horns at the near infancy of the art, is to know the best sort of alliance between digital wizardry and artistic judgment.