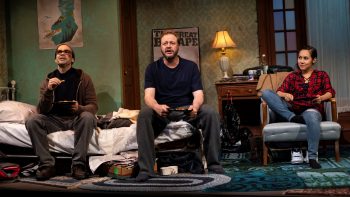 Perhaps it was the vivid recent memory of the splendid O’Casey cycle at the Irish Rep in New York, but early in the course of The Night Alive, long before Conor McPherson introduced the time-bound specifics, I felt he was recording a moment in history, as O’Casey had done in many of his plays, especially the earlier ones, which he wrote so close to the events that moved his characters, that they have a whiff of the reportage. The events that surround the action of The Night Alive are no more central to McPherson’s story than they are to O’Casey’s. Both are focused on their characters, on people, as their situation is determined by events outside their control.