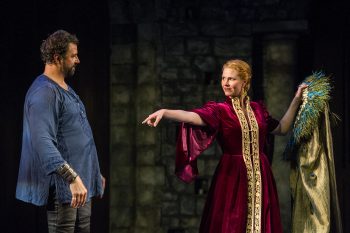 Mark St. Germain’s Freud’s Last Session, which is receiving its permiere at the Barrington Stage Company this month was inspired by Armand Nicholi’s valuable little book, The Question of God (2002). Dr. Nicholi, a practising psychiatrist, teaches at Harvard Medical School and Massachusetts General Hospital and has also taught an undergraduate course on Freud for many years at Harvard College. Written in very simple, clear prose and taking nothing for granted in the reader, even that the reader knows who Sigmund Freud and C. S. Lewis were, he compares their thinking on the existence of God and other related matters, in such a way as to suggest a debate, between the two. Lewis, a generation younger than Freud, was influenced by him during the earlier part of his life, when he professed atheistic beliefs. In The Question of God, which I did not know before seeing this production and which is readable by almost anybody, Dr. Nicholi accomplishes an extremely important task with unparalleled success: he demonstrates that it is by no means necessary to believe in God, but that it is necessary to define one’s beliefs and to think about them in a rational way.