A Musical Weekend at Williams, I:

“Three Premieres and a Classic”

George Gershwin: An American in Paris

Williams has traditionally placed a high value on the arts without exactly pursuing the disciplines to the level of more specialized institutions, like Bard or Oberlin, except perhaps in the visual arts. The ‘62 Center has changed that in respect to theater, and the new facilities, as well as the distinguished faculty who have been hired to go with it, like Omar Sangare, the brilliant Polish playwright, poet, and actor, have attracted the sort of students who might otherwise have chosen Yale or Tisch. The Williams community, Berkshire residents, and whoever decides to make the trip, can expect great things in the future. Music, while very much a Cinderella in terms of physical plant, considering the problematic acoustics of Brooks-Rogers and Chapin Hall, is nonetheless richly endowed with talent of the first order, and many of these assets were much in evidence this past weekend in departmental chairman David Kechley (recently awarded an ASCAPlus Award as well as an Aaron Copland Award composer residency from Copland House), cellist-conductor Ronald Feldman, and, on Sunday, David Porter, Harry C. Payne Visiting Professor of Liberal Arts, who is as much a classicist as a musician.

Friday’s concert was memorable primarily for Mr. Kechley’s (b. 1947) rich and haunting symphony, which was joined by two other premieres, a movement commissioned to accompany the video game Lair by Kevin Kaska (b. 1972) and John Debney (b. 1956) and Brazilian composer Felipe Lara’s (b. 1979) tone poem, Onda. Of these only Mr. Lara, who is a graduate student at NYU, could be considered a young composer, as much as Kaska and Debney’s work belongs to a new medium. John Debney is a prominent Hollywood composer, who provided the score for Sin City, I Know What You Did Last Summer, and, most importantly, Mel Gibson’s The Passion of the Christ. The style of their movement, “Diviner Battle Music,” should be familiar to most moviegoers, at least those who have taken in The Fellowship of the Ring films and the like. The movement was neatly put together, full of atmosphere and drama, and intensified with impressive sonorities. Mr. Feldman led the Berkshire Symphony in a spirited performance, free from any trace of condescension, which brought out the music’s resourceful orchestral colors, its energy and drama, and all its other good qualities. The program notes did not make clear the exact nature of Debney and Kaska’s collaboration. Now if we hear dramatic music potted for the concert hall, it’s a good idea to get to know it in its original context. (Can a work of art be both dramatic and interactive? I’m a little naive on such questions.) In this case, I’ve heard that entertainments of this sort can be highly addictive. I disown any responsibility as to what may happen to you, if you follow my suggestion.

Onda is a classic tone poem. Its title means “wave” in several Romance languages, and it does indeed bring Debussy’s La Mer to mind at times, but in a way refreshingly free from the obvious clichés a composer might fall prey to. Mr. Lara introduces his undular motif with sharp attacks and a brilliant sound from a very large orchestra. Although scene-painting and atmosphere were central,Onda showed a strong sense of form in equal measure. As in the music from Lair, colorful orchestration was central, here enriched by a more sophisticated musical imagination, more daring sonorities, and a vivid exoticism. Again Mr. Feldman’s reading got right to the core of the music and brought it to life as it should be: what was harsh was harsh, what was strange was strange, and delicate passages were most sensitively played.

However the most important work on the program was without question David Kechley’s symphony in four movements, a work which, without being overtly avant-garde, shows most persuasively that there is life in the old form yet. The work is actually rather conservative, eschewing the world of video games and following Liszt, not only in its moulding of symphonic form but in coming to grips with major literary monuments like the King James Bible, a haiku of Buson, Shakespeare’s Macbeth, and Proust’s À la Recherche du Temps Perdu. And I mean that Mr. Kechley comes to grips with his literary models; he addresses them bravely and directly, as Liszt read his Dante and his Goethe; he rolls up his sleeves and reaches into them up to the elbows, producing intensely imagined dream images, which proved totally engrossing in performance. Kechley not only derived a substantial musical and dramatic structure from his sources in each movement, but he worked them together to create a unified symphonic work. That this was by no means a mere intellectual exercise was clear from the emotional power of this dark, brooding work, which ended under black clouds of diminishing consciousness, emphasized by the extinction of the lights over the stage.

David Kechley’s symphony is entitled WAKEFUL VISIONS/MOONLESS DREAMS. As he says in his program notes, “Dreams can sometimes seem quite real while visions experienced in the light of day may seem completely unreal. Dreams or visions can be frightening, comforting, spiritual, playful, and so many other things. Each movement of WV/MD explores some of these qualities and finds its point of departure in a suggestive literary source.” Kechley’s sober explanation belies his power (or powers?) as a dreamer. The symphony’s four movements are called I. Whirlwind, II. Notari Notari, III. Something Wicked, IV. Moments. The text for “Whirlwind” is Hosea 8:7, “For they have sown the wind, and they shall reap the whirlwind…” “Notari Notari” comes from Buson’s haiku, translated as “Behold! The spring sea undulates/and undulates the whole day long.” The text of “Something Wicked” comes from Act IV, sc. 1 of Macbeth:

By the pricking of my thumbs,
Something wicked this way comes.
Open, locks,
Whoever knocks!

“Moments” was inspired by Proust’s statement that “The moments of the past do not remain still; they retain in our memory the motion which drew them towards the future, towards a future which has itself become the past, and draw us on in their train.” These texts do not evoke dreaming in any obvious literal way, but if one were to meditate on them and either sleep or extend the meditation into a dream-like state of consciousness, the authors’ images could well be appropriated into revelatory dreams, moral in the first case, existential in the second, nightmarish in the scherzo, and reflective in the fourth—reflective on the power of memory to lead us on until all our experience has become memory.

Like the culture from which his concept emerged, Kechley’s musical language is rich and full-blooded, and often enhanced by allusive references to great music of the twentieth century. His thematic material is unabashedly, Romantically expressive, exhibiting marked rhythms, strongly shaped line, and all the color and force of a very large orchestra. In the swirling first movement reminiscences of Stravinsky appear, not only in general stylistic gestures, but in specific recollections of Le Sacre du Printemps, a suitable mythic subtext for this hallucinatory evocation of the world of the prophets. And did I also hear Bernard Herrmann making an appearance? Also striking was a hauntingly quiet, but rushing passage colored by harp and xylophone. “Notari Notari” was replete with Japanese sonorities, including quarter-tones and traditional stringed instruments. A handsome flute melody with marked jumps sounded particularly satisfying in Chapin Hall, as did most of the evening’s music. The diabolical activities of witchery have been portrayed so often in music that Kechley’s sheer nerve in taking on the task is to be admired, and he brought it off with barely a trace of the hackneyed, thanks to his resourcefulness as composer and orchestrator. Percussion came vividly into play here. A devilish transformation of a playful theme from Bartók’s Concerto for Orchestra visited in both bassoons and clarinets. Moments began with a gorgeous violin solo, most compellingly played by concertmaster Joana Genova-Rudiakov with a haunting dark timbre, continuing against a heavy brass accompaniment. There ensued a imposing Brucknerian passage of rising brass chords, as well as contrasting sections of extreme delicacy, like a tremolo recalling the harp and xylophone passage in the first movement. These varied sections, which evoke the life of memory and reminiscence, developed into a mournful chorale, which became increasingly fragmented as the end approached. The symphony concluding on this uncompromisingly serious and deeply moving note. David Kechley’s WAKEFUL VISIONS/MOONLESS DREAMS was no post-modern foolery, but without a doubt the real thing.

Here Feldman also had his most substantial challenge, which he overcame brilliantly. With his relaxed but athletic manner and his eloquent but precise stick technique, he achieved a performance which seemed to extract every last drop of invention from the score, always with the most engaging musicality. Consistently Mr. Feldman confronted every bar with intelligence and honesty, never attempting to slick over any difficulty or surprise. This is the very best in the performance of new music. Composers and audiences couldn’t be luckier in enjoying Ronald Feldman’s faithful services. No new music could be in better hands.

Partly because of the elaborate scoring of the premiered works and partly because of Mr. Feldman’s skill, the acoustical deficiencies of Chapin were rarely in evidence, even in sensitive passages like flute solos. In the final work, George Gershwin’s rumbustious tone poem, An American in Paris, this was occasionally bothersome in the slightly hooded sound of massed violins. However, winds and percussion were as vivid as in the earlier works, and I’ve never hear the famous klaxon-motif sounding more effective. This fully satisfying performance of an old friend was most detailed and spirited, and Mr. Feldman’s controlled pacing of the concluding section was particularly impressive. 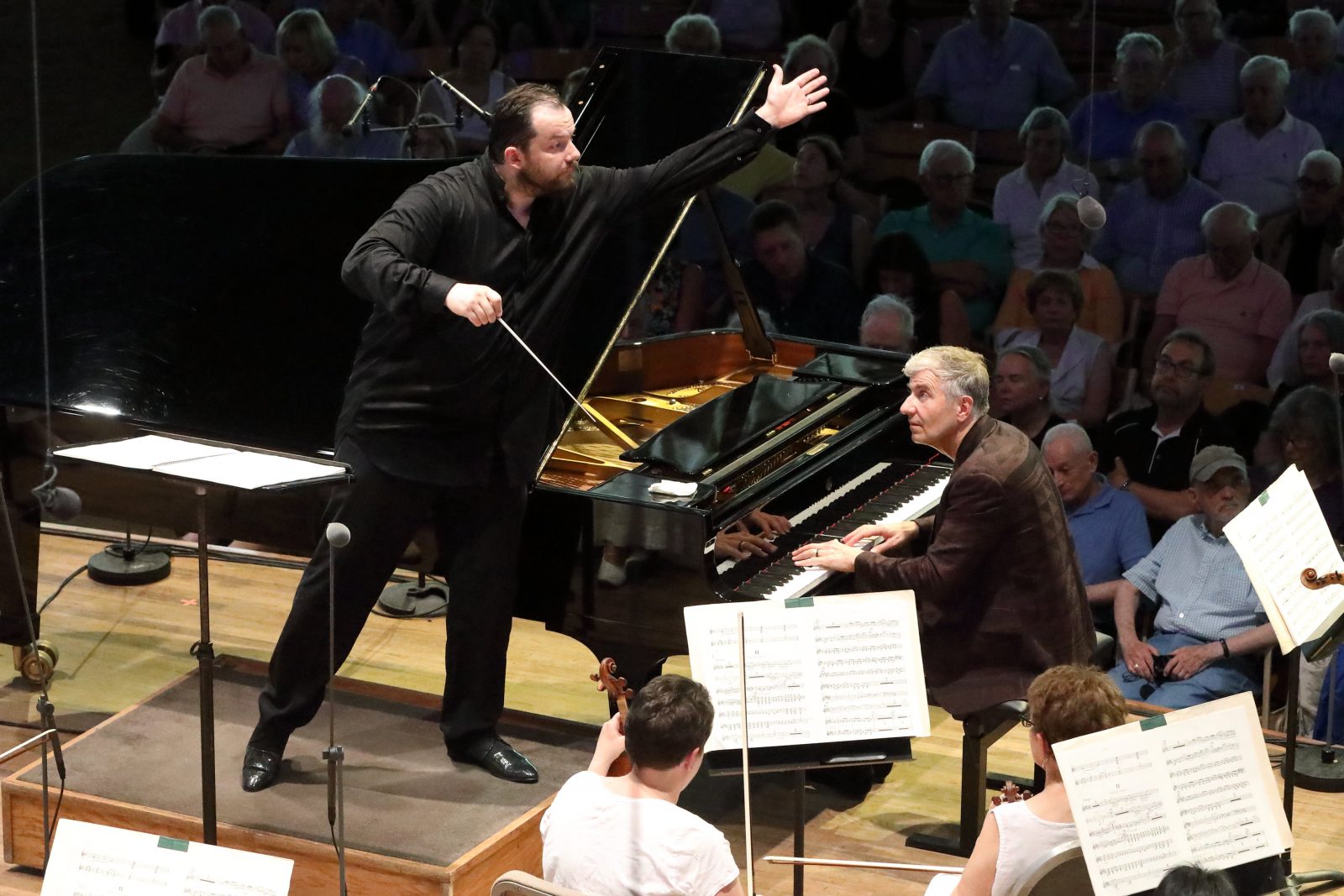