John Harbison is a composer of international importance and deserves, and gets, performances and honors everywhere. But it is especially appropriate that Boston honor him, on this the occasion of his seventieth birthday, because he has given so much to the city as teacher, founder and leader of musical groups, promoter of music’s importance, encourager of young musicians, and, yes, composer. Boston’s many musical organizations, including the Boston Symphony Orchestra, have turned to Harbison over the years for new pieces and been supplied with plenty that have meant a great deal to audiences here—chamber ensemble works, vocal works, symphonies. In the concert of March 20th, the formidable Boston Modern Orchestra Project, led by Gil Rose, presented in concert version Harbison’s early opera Winter’s Tale, based on the Shakespeare play. And though at the end the audience reception was very warm for all concerned, the greatest applause went to the composer. 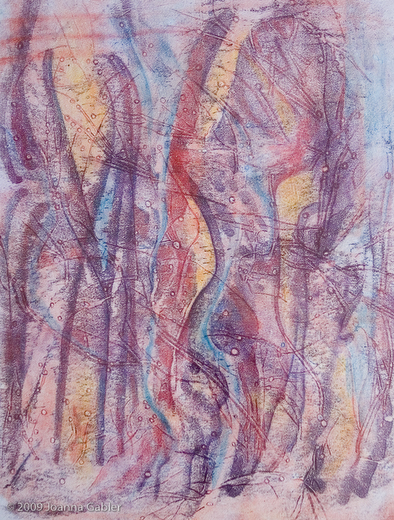 After hearing Ani Kavafian and Mihae Lee’s recital of September 25, 2008 in Chapin Hall (reviewed here), Joanna Gabler felt inspired, especially by their playing of Beethoven’s “Kreutzer” Sonata. She went to her studio after the concert and began a series of  mixed media drawings which recreate the impression the Ms Kavafian and Ms Lee’s playing of the sonata made on her that evening. The works, which involve a complex monoprint-like process  created with water-soluble oils enriched by pen, pencil, and pastel overdrawings on layers of a very thin, semi-transparent paper and superimposed on a white background with an archival matte acrylic medium, took some time to complete, but they capture the immediacy of her experience in the concert hall.