The ABCDs of Sol Lewitt

There’s only one artifact that has any color in the exhibition, a systematic gridded display of clouds, the rest of the installations are in black-and-white or achromatic gray. The spare simple constructions in the exhibition which are executed cleanly and in an intimate or intermediately large scale seem to reveal more of the presence of the artist (if not his hand) than the murals and wall drawings at Mass Moca.

A few revealing words—which may not be the artists own—insightfully narrate, isolate, and perhaps reveal the artist’s intentions. One of them is “play” (many of the objects in this exhibition are very toy-like, and, despite being dispassionately constructed, they are not scientifically or mathematically dry.) Ironically, you’re not supposed to have fun looking this work… a statement that is from the artist says that these works ought to be thought of nothing more thansomething akin to the instructions of a bureaucrat being carried out from start to finish.

Mr. Lewitt’s capitalized handwriting in pen on some of the un-typewritten lists of instructions is a little clumsy, and that’s good. His handwriting isn’t intended to be confused with architect’s lettering… which is usually punched out in mannered capital letters, or the tyrannical DO NOT instruction signs we see left around the house or in the office by whoever is the boss. Fortunately, it is also not the disposable anonymous transient lettering found on post-it notes.

It is the simple, modest and slightly erratic handwriting of an American bureaucrat. There are no cursive ornamental frills that are characteristic of European script (as beautiful as that can sometimes be). The frankness of the lettering is more reminiscent of what we would expect E.B. White’s handwriting to look like.

Simplicity is another word that has affinity to an E.B. White paradigm… Keep the paragraphs and sentences short and to the point… and devoid of effusiveness of any kind.

In biology… cell-division and the growth of organisms tend toward symmetry because symmetry is efficient. As organisms become more complex―it’s likely that their physiognomy will become simplified for efficiency’s sake.

In these respects there is a pragmatically American character to Mr. Lewitt’s thought process and realizations… Paper-and-pencil efficiency, playful fastidiousness, and finally… Shaker-like artfulness and plainness.

It would be interesting to find out whether Mr. Lewitt attended a Froebel kindergarten or Montessori school.

One of the works in the exhibition entitled “Modular Wall Structure” undated, is a linear arithmetic 1,2,3,4,5,4,3,2,1 numerical progression of cubes, where a set of 4”x4”x4” cubes are constructed of 3/8” square struts of painted wood. The lap-joints at each corner are fastened with tiny round-headed brads that have a primary, precise, simple, and un-mystified geometry that is toy-like and a lot of fun to look at. It exhibits pure, unadorned structural integrity because the sub-units are each self-contained structures fastened to the next series by a common joint.

In another exhibition room there are displays reminiscent of larger scale crystalline irregular solids constructed in painted aluminum or cast polyester resin.The structural integrity, scale, and cleanliness of the materials from which these are made give them a stunning purity that evokes the grander scale of the MassMoca exhibition.

Variability is another feature that permeates the exhibition. In ways that are akin to mathematical set theory, the attributes of Lewitt’s art are variable within a specified set of transform limits. This idea is very different from the frequently misunderstood concept of variety which is thought to be a prerequisite component of great art. In this respect, there is a resonant affinity between Mr. Lewitt and the outlook of Joseph Albers, the pedagogical giant at Yale, who stressed conceptualization and experimentation over material realization―and that concrete simplicity ought to permeate the material realization of art. Both Mr. Lewitt and Albers operated in an ideology that was antithetical to the cult of personality which they considered to be the scourge of artistic realization and appreciation.

Several years ago, I heard a lecture by Moshe Safdie who was at the time chairman of the Graduate School of Design at Harvard. One of the themes of his talk was the influence that toys have had and are having on the development of architectural forms, given the structural similarity and affinity to the Lewitt exhibition has to architectural models, there seems to be additional convergence of thought, means and ends.

Richard Harrington is a sculptor, printmaker, and installation artist residing in the Northern Berkshires. 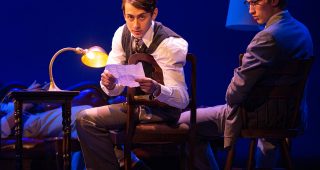 1 thought on “Sol LeWitt III: The ABCDs of Sol Lewitt”