Benjamin Bagby has been performing Beowulf now for twenty years, usually to sold-out houses, especially in New York City. (I’ve tried and failed to get tickets more than once.) Audiences and critics rave about Bagby’s ability to create a spellbinding effect in his recitation/singing over the hour and forty minutes of its duration — all in what is practically a foreign language, even if most people call it Old English. With brilliant success, Bagby has transformed what was once the bane of American English majors — all too long ago: that last of those required to address the older stages of our language are hoary of head and halting in gait — into a thrilling entertainment full of color and expression. It is as if the early music movement had finally spawned their Stokowski. The effect is so essentially baroque. What Lear or Hamlet has speech, declamation, and singing in his dramatic quiver? In this way Bagby has bridged the language gap and made it possible for modern audiences to share something like the enjoyment a medieval scop’s audience would have experienced in a bardic performance. Of course today we sit decorously in Seiji Ozawa Hall or some place like it, and there is no mead or beer at hand. On the rare occasion that a line comes out as comprehensible modern English, we laugh. Our eyes flit back and forth to and from the supertitles… 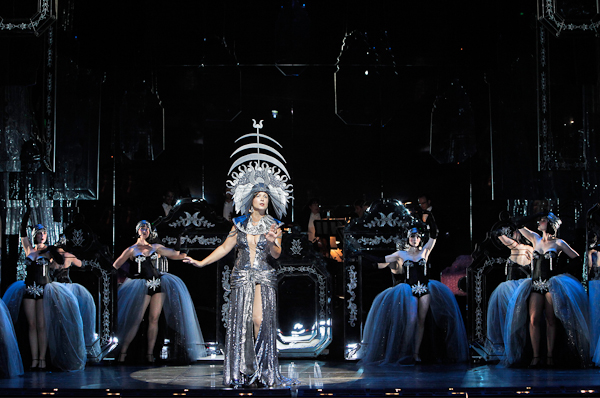 It is the long-standing custom of the Bard SummerScape Festival to present an important neglected opera, closely related to the composer around whom the Festival is built, but not by the composer himself. In my recollection, Schumann’s Genoveva, Zemlinsky’s Eine Florentinische Tragödie and Der Zwerg, Szymanowski’s King Roger, as well as Meyerbeer’s Les Huguenots were all important, of very high quality, and significantly related to Liszt, Elgar, Prokofiev, and Wagner. This year’s opera, Franz Schreker’s Der ferne Klang, is no exception, in fact, as a neglected opera, it is especially important, because in its time it was one of the most often staged contemporary operas in Germany.

I was of divided mind. Cellist, Pieter Wispelwey From the familiar opening measures of Bach’s great set of cello suites, any resemblance to performances I had previously heard (or could imagine from the score), any accordance with Baroque performance practice I had studied, and any sense of veneration to “The Bach Suite As Such” had been thoroughly dashed. I listened with jaw-dropping surprise at Wispelwey’s granular, hyper-rhetorical phrasing – now playful, now expressionistic, now rapturous, now diffident, always light-on-the-bow – and felt completely alienated by a radical departure from a performance tradition I had loved. Where were Janos Starker’s muscles? Where was the grunting and spiritually ennobling midwifery of Pablo Casals whose hulking, devotional approach attested to the phenomenon, as G. M. Hopkins said, “sheer plod makes plough down sillion shine”?

In the opening scene of Ödön von Horváth’s Judgment Day, Frau Leimgruber, bitingly played by Kelly McAndrew, gives us (and the travelling salesman who walks in) an earful about the nice, hard-working stationmaster, Herr Hudetz. In this remote small town, Herr Hudetz has to do everything that needs to be done at the station. He sells tickets, collects packages, changes the signals, etc., etc. — all for low pay. However, he does get a house by the station, which affords his jealous wife a view of everything that goes on there. Frau Hudetz, fourteen years older than her husband, managed to entrap him into marriage. Now, as her age catches up with her, she is embittered and makes his life miserable any way she can — above all through her jealous rages and her unwillingness to allow him any independence at all. She has stopped even his innocent hours in the local tavern, “The Wild Man.” She and her brother Alfons, the local apothecary, are without a doubt the most unpopular people in town.

On taking my seat in the Music Shed, I was surprised to see the gentlemen of the BSO in shirtsleeves — and it was a pleasant surprise. Their playing of Mahler’s Second was very much a shirtsleeves sort of performance, and that was also a pleasant surprise. I’ve heard that Michael Tilson Thomas had very little rehearsal time for this concert. This made itself heard, I thought, in a certain lack of concentration in the fifth movement — entirely unlike the first three movements, which were intensely focused, if anything. Even with this proviso, the performance was an impressive success. MTT took charge of the orchestra with total confidence and produced his personal sound and interpretation from the orchestra with authority and conviction — and it was precisely this that made the performance so outstanding.