Julia Morgan Leamon is a painter and adjunct faculty member at Williams College and, among other things, an equally gifted video artist. http://www.jmorganart.com/

When talking with her it’s hard not to be aware that a deeper level of insight is at work in the ways that visual artists channel imagery and memory. Maybe it’s because she processes language and vision in equal measure. She acknowledges Virginia Woolf and Francesco Goya among her greatest influences.

The paintings I saw recently at an exhibition in Becket, MA, are sometimes travelogues, and, at other times, narratives of more general stages of human development… adolescent girls learning how to swim for example. These stories of vulnerable human behavior and gestures— “trajectories” to use her word, are affected by their instance in time, what happened just before an image was stored in her memory (or our memory), and what may be the consequences of that moment in time.

It’s easy to identify with her empathy for the giddily heroic time of girls learning to swim, screaming, splashing, one day you can’t do it, the next day you can and then you pass on to the next hurdle in life knowing that these were likely part of her early learning experience. There is an equally compelling through-a-glass-and-darkly sense in these paintings, a sense of loss, and the transient and fragile nature of joy.

So the images are autobiographical and iconic as she explores universal human truths where glee and loss go hand-in-hand.

Her oil painting technique itself is a materially substantial record of these themes. She paints human figures with the ease and proportional insight of great paintings, she has a masterful understanding of directly observed and rendered gestures, and fills polychromatic areas of color with proportionally correct, calligraphic brushwork, sometimes using a palette knife.

Some of her work reminds me of Winslow Homer’s “The Undertow” at the Sterling and Francine Art Institute in Williamstown, Massachusetts for  several reasons. Her fat-over-lean application of paint, sea green, turquoise, and flesh tone color palette, the scale of the paintings and strong narrative elements to me at least have a synergy with Homer’s painting. She also shares Homer’s eye for seemingly innocence gestures enigmatically wrapped in darker meaning, and the pragmatic accuracy that is characteristic of some American iconographic painters.

As mentioned earlier, she is also a very gifted video installation artist. I recently saw Apollo Risen, a work for which she was commissioned at the Lichtenstein Center for the Arts in Pittsfield, MA.

Apollo Risen is projected in one of the vertical windows there. Its clean and careful execution stands out beautifully and coherently from the street—as far away as 100 feet. A perfectly made stainless steel placard on the exterior brick wall tells the story:

A former thread and cloth mill company in the Berkshires in Massachusetts was commissioned by NASA to design and produce cord netting for holding the American Apollo astronauts’ belongings during the space mission. The company also produced other applications for thread including military braid, tassels, and other kinds of trim.

The video is a close-up of a tassel suspended in darkness that is intended to evoke deep space and weightlessness, as it rotates and gyrates irrationally in super slow motion. My initial reaction was that it looked like the movement of an anonymous and menacing deep sea creature pulsating in the undertow. Part of the sound track was dialogue from the liftoff sequence of the Apollo 11 space mission and an excerpt of President Kennedy’s memorable invocation speech to put men on the moon in the Sixties. There’s also drum-and-bugle corps band spliced into the sound track, reminding me of the New England icon Charles Ives musically splicing together disparate sound elements to achieve that certain je ne sais quoi of Americana.

The conical shape of the tassel in its passive un-agitated state as it moves up the frame vertically, serves as an interesting stand-in for the Saturn Rocket during the ignition sequence and liftoff. This appropriation of the tassel gives a new life to a sequence that has become clichéd to people of our generation who have seen so many successful launches and a few notable catastrophes.

Now it’s worth exploring some of her influences as a video artist. She and I discussed Harold “Doc” Edgerton of MIT, a pioneering strobe photographer. The nature of his contribution was the compression of time to pulses of light that reveal the hidden transformative beauty in prosaic events like an apple being pierced by a bullet,  or the corona created by a drop of milk. Edgerton continues to stun and inspire photographers and videographers to this day. But the advertising industry’s overuse of the strobe camera to hawk chocolate milk and towel softener is an annoying consequence of what was then original and profound. Julia’s poetry with the video medium is more in the spirit of Edgerton, in spite of the fact that in her videos the object is moving– not still.  The tassel in Apollo Risen lives at least three lives. We realize what this object is, what it symbolically stands for, where it fits into her iconographic vocabulary, and the transformative effect that they have collectively. As with Edgerton, the object is commonplace, but by putting it through variables of movement, its trajectory is becomes the focus. The tassel is an ornamental symbol of power in a military uniform, but Julia ingeniously also uses it as a stand-in for to the conical shape of a rocket.

A final thought came to me that may be subliminal for Julia. The tassel also resembles the strands of a huge Japanese calligraphy brush. When we first see the tassel going through an agitated sequence, we can also be reminded that Julia Morgan is, perhaps, a painter first, and that her process comes full circle, to gesture, trajectory, and enigma.

Richard Harrington is a sculptor, printmaker, and installation artist residing in the Northern Berkshires. 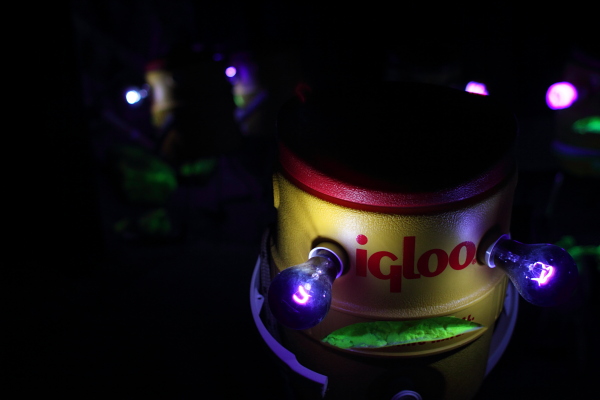