Always accurate in intonation, Shagimuratova dazzled in her first aria and unleashed an Elettra-like fury in her second, earning the only true “aria ovation” of the night. The applause after Der Hölle Rache lasted long enough that she could have re-entered for a diva bow and an encore had she been so inclined. Vocally she so dominated the evening, I was disappointed she didn’t.

With the striking exception of David Pittsinger as a luxury-cast Speaker and Alek Shrader’s Tamino, the rest of the vocalism was musical and mostly tasteful, yet often unexciting. Shrader was announced as suffering from a cold, but one would never have known it otherwise. Technically assured, with a satisfying spin to the voice that allowed him even with some indisposition to deliver a beautiful Dies Bildnis. It may be that contemporary audiences don’t recognize the challenges of maintaining legato and nonchalant control of tricky tessitura. Perhaps in a smaller house and possibly with a more heroic characterization, Shrader would have awakened the audience’s attention with his singing, but he is far above the run of the mill.

Although his indisposition was unannounced, Kristinn Sigmundsson was clearly ill and had to deliver Sarastro’s two arias and various ensembles with a severely compromised lower register. He hit his notes and maintained dignity in a costume that was potentially usable for a snazzily dressed Mikado. However, for an artist of his stature and ability, it must have been a painful night.

In the twenty-one years since I first heard Nathan Gunn, he has lost none of his capacity to exuberate with appealing boyishness on the stage, and his natural alertness to dramatic and musical nuance have only deepened. The voice itself is noticeably drier now, which in this role was only intermittently problematic. The sweet likability of his characterization was mitigated only by some completely unfathomable Li’l Abnerisms that director Harry Silverstein allowed to slip through the filter and by Gunn’s bearing the brunt of the often awkward translation. Credited to SFO General Director David Gockley and to conductor Rory Macdonald, there were recognizable patches from the Edward J. Dent’s version (vintage 1911!).

Some of the problems in the sung text lay in the translators’ honorable effort to respect every syllable and feminine rhyme of the original German. Unhappily such assiduous care made for some less than graceful English. Gockley, Macdonald, and Silverstein share the demerit for a superfluity of forced humor in both dialogue and sung text. The low comedy elements of singspiel did not stay localized with Papageno and Papagena (Nadine Sierra’s voice gleamed in her one duet) and Monastatos (Greg Fedderly sang strongly and camped with restraint), but infected the language of Pamina, Tamino, and the Three Ladies as well. Flute‘s blend of the shticky and the sanctimonious has never been lump-free, but this version lapsed too often into the tacky. It would be worth going through the book and score after this season with both a red and a blue pencil, try to shorten Act II (which hath ever and always run too long for comfort), and delete the glaring slang and adolescent sex-talk. Anyone who’s ever seen Gypsy knows the difference between Vaudeville and Burlesque; this rendering blurred that line to ill effect.

The ravishing physical production utilized projected digital animation that was delightful but seldom distracting. Colored lines and geometric shapes played wittily over the show curtain during the overture and had me smiling at once. The toy-like animals, especially the brood of rotund, little, winged Papagenokinder, were irresistible. Certain images, the exhausted slaves and gentle priests mingling at the opening of Act II, the Three Boys in their simple flying machines, were appreciably haunting. The production’s recognizable cultural aesthetic is clearly Japanese, which meant that a good opportunity was unhappily declined to edit Isis and Osiris out of the libretto, since neither Egypt nor Freemasonry were much in evidence. More troubling, and something that should be fixed now rather than later, was the enduring racist reference to Monostatos as a Moor. There was no black-face and no other reference to color, thank God, but in the show’s newly minted, eclectic modernity, there was no need to present the would-be rapist villain as Moorish. Rewrite now!

The production did try hard to undo the other obsolete political prejudice of the original, the glaring misogyny that pits an essentialist female mendacity and insubordination against the victorious power of essentialist masculine truthfulness. The translators’ efforts to erase the stain were gratifying, but of necessity incomplete. There is no way to abstract it utterly from the libretto, and in this day and age it is just unpleasant to encounter. Gockley’s, Macdonald’s, and Silverstein’s strategy – again, a smart choice honorably attempted – was to describe the Queen of the Night as a uniquely villainous woman, rather than a typically villainous one. Where the strategy failed, though, was in the weight it placed on Pamina’s heroism in contrast. The score doesn’t give her the music she needs to depict such sovereignty, and the plain-Jane costume, coiffure, and demeanor of Heidi Stober’s Pamina truly couldn’t live up to it. She sang with elegant musicality and mustered some vocal heft for Ach, ich fühl’s, but hers isn’t a grand instrument in the tradition of any Price (Leontyne or Margaret), Steber, Amara, or Te Kanawa, nor a ravishing one smaller one like Kathleen Battle’s. Given that the whole plot of the opera revolves around Pamina’s rescue, and that the new translation elevates the figure to the moral heroism originally assigned to Tamino, Stober’s performance is just not big enough.

Debut conductor Rory Macdonald moved the music along, still allowing solemn moments to be solemn, and held things together well. He invited some unwritten vocal and instrumental ornamentation that neither marred nor enhanced affairs particularly. A momentary loss of synchronization between pit and offstage chorus was a small flaw in a first performance. The excessive distance of the offstage chorus after the trials by fire and water is a problem that should be remedied ASAP. The trio of boys, the trio of ladies, and the pairs of slaves and priests all acquitted themselves honorably. 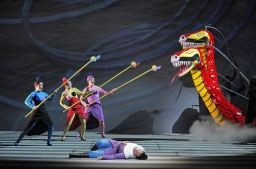 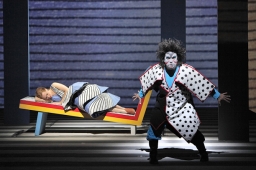 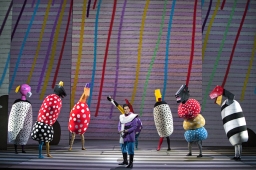 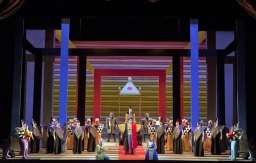 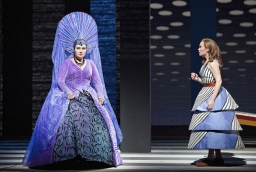 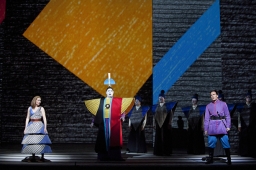 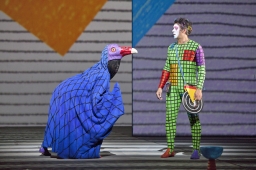 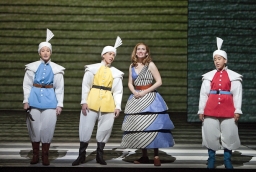 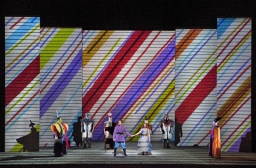 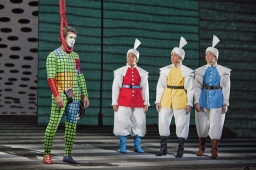 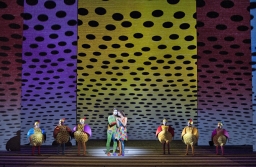 Nice touches were plentiful in Harry Silverstein’s staging. He knew when to move people and when to leave them stationary. His giving Pamina the flute and the leadership through the trial by fire and having Tamino adorn her with Sarastro’s emblem of priesthood at the end expressed a better gender politics than can be found in Schikaneder’s libretto. The chorus pictures were well coordinated and his collaboration with Kaneko on the ever-changing set projections was very sophisticated, all the more praiseworthy for supporting and not over-powering the story. Lapses that should be mentioned because they can be fixed included the dead zones between scenes anytime a shrouded stagehand or super had to strike a set piece, the inexplicable omission of Papageno’s prop bells from the staging of Ein Mädchen oder Weibchen (the score only assigns the celesta to the magic bells, which hung inert around Gunn’s neck), and frankly, an uncoordinated curtain call that really should be drilled before the next performance.

In sum, a visually beautiful production with many striking moments and innovations, and a generally satisfying performance that could tighten and brighten appreciably for the next revival.

To read more about the production, see the San Francisco Opera’s site:

What are we to make of The Magic Flute? A comedy with a serious vein or an amalgam of conflicting styles? Mozart’s last opera has always been something of an anomaly. Smashing together various strands, with murderous threats and obscure rituals, Mozart and his librettist Emanuel Schikaneder created a very strange opera indeed. But many of those intriguing facets were part and parcel of the suburban theater company for which the piece was written.

If there is an opera of Mozart’s that deserves the Wagnerian term “Music of the Future,” it is surely Die Zauberflöte. None of the great composers had attempted anything like it before. A fairy-tale pantomime that reveals itself as a Pilgrim’s Progress of the Enlightenment, it far transcends the operatic category in which it was conceived.

An opera production is a journey: a few travelers set out, they are joined by many more, arriving at the destination that is the performance. It may be begun by an impresario, who trusts an artist to make a thrilling design of one of the greatest operas ever written. They might be joined by a director, conductor, and a staff of theater artists who continue to build a concept based on how the project will look and how the story will be told. The journey certainly would be continued by a brilliant cast, orchestra, and stage crew, all of whom will collaborate to interpret a 221-year-old work of art in a fashion that is vitally interesting for a contemporary audience. As you have no doubt imagined, this was our journey.

Most will agree that there is no more complicated art form than opera—a nexus of music and singing, dance, set and costume design, lighting, and a host of other artistic mediums. So it comes as no surprise that opera has a storied history of noted architects (Vetruvius, Gehry, Libeskind), fashion designers (Armani, Versace, Prada), and visual artists (Chagall, Hockney, Chihuly) who have created work for the stage. Mozart’s The Magic Flute in particular has a star-studded roster of artists who have designed productions, including Prussian architect Karl Friedrich Schenkel in 1815 and, more recently, artists Marc Chagall, David Hockney, William Kentridge, and Maurice Sendak. This summer, San Francisco Opera adds another name to that list: Jun Kaneko.