Songs my Motherboard Taught Me: Music in the Age of Isolation.
Yo-Yo Ma and Emanuel Ax play Beethoven, Brahms and Mendelssohn
August 3, 2020

Brahms – Adagio from the Violin (transcription) Sonata in D Minor #3
Beethoven – Sonata for Cello and Piano #3, Opus 69.
Mendelssohn – Song without Words for cello and piano, Opus 109. 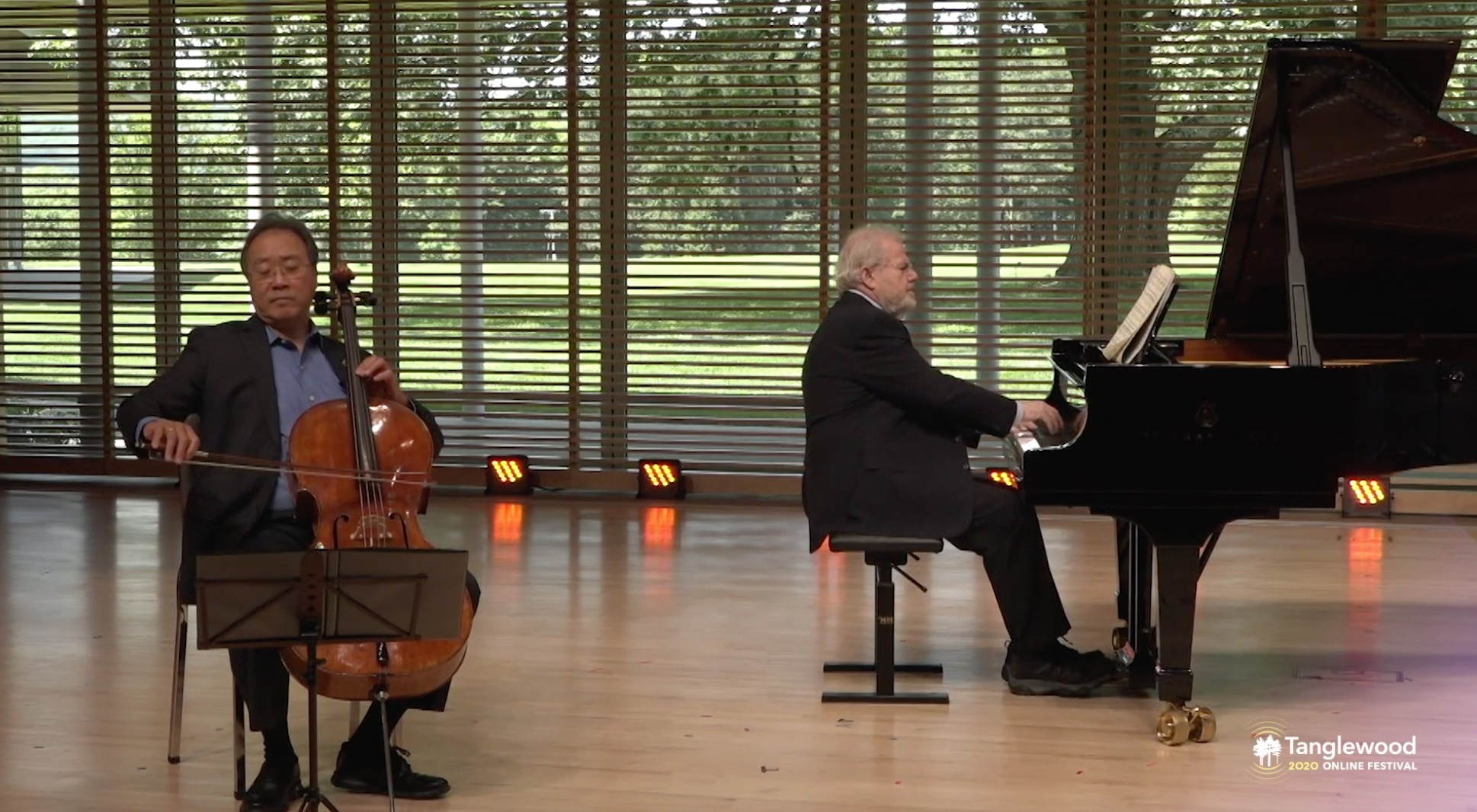 The closest I ever was to Ax and Ma physically was at a Tanglewood performance of Strauss’s Ariadne auf Naxos in the now defunct cramped little theatre almost twenty years ago.  The famed duo sat directly behind me and we all somehow perambulated and mixed outside during the intermission. They were so informal and easy going, that I could immediately sense their mutual affinity and earthiness. we must regard them as being among the finest musicians of the past half century.  Their seeming lack of charisma and pomp only endears them to us. Or, perhaps in our image-conscious times, familiarity breeds presupposition?

Their casual banter was on display in this time of our lives when “kidding around” could be noxious. They appeared as old friends, trying hard, like us all, to survive in this suffocating climate, and making embarrassingly good music while sharing the feast. The impression left by Beethoven’s Cello Sonata #3 tonight, a work this duo has played together for decades, was unexpected.  There is a theory that great music can never be boring and is renewed and reconstructed with each new instance.  Such was the case in this streaming event.  As the two played, I felt the performance as a succession of noble, graceful, and magnanimous recollections of states of being from decades ago.  Nothing had been lost in the transition.  The Romantic canon can still magically evoke the past, and rescue us from our miseries.  I had a Wordsworthian spot of time musical experience.

Ax and Ma chatted about their relationship over the years and the personal idiosyncrasies that sustain or annoy them both. To engage novice listeners, the Beethoven sonata became the subject of some slightly nerdy talk about the tonic-dominant-tonic arches that propelled the Beethoven’s sonata. Finally, somehow, they drifted to discussing chef Jacques Pépin’s freaky tolerance for seizing hot skillets its supposed relevance in interpreting the piano attacks in the scherzo.

The Brahms adagio, sounding more heartfelt with a cello than violin, was a moving tribute to a friend that fell victim to Covid-19. Ma’s tone was like a warm shawl for the encroaching Fall. The Mendelssohn Lied ohne Worte , Op 109 was a simple and elegant adieu.

These days, there’s no reason for me to drive anywhere.  But, the next morning I made a completely unneeded trip to listen again to that Beethoven, recorded by Ax and Ma years ago.