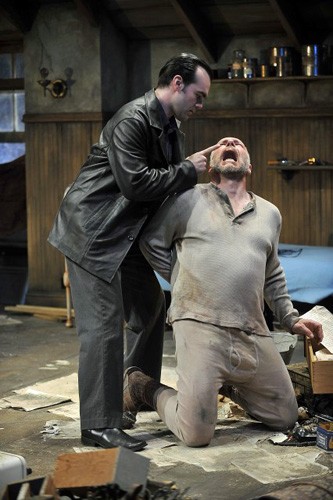 Harold Pinter is still very much alive, a potent and welcome presence in the world because of his political work, but when The Caretaker, or any other of the plays from the height of his fame in the theater, is produced, most of us take it as a classic from the past. After all Pinter’s announcement in 2005 of his retirement from the stage marked a significant break, and the world has changed significantly since the sixties. His powerful Nobel Prize lecture, Art, Truth, and Politics, meticulously prepared and taped by BBC 4, shows his current way of reaching his audience in a time when indifference, commercialism in the media, and unofficial censorship make it virtually impossible to get salutary and unpleasant messages across to anyone who is not already convinced. We deal with people who disagree with us by marginalizing them. When he wrote The Caretaker in 1959, his first commercial success, he established himself as the quintessential all-round man of the theater. He already had considerable experience as an actor and director, in addition to the plays he had already written, of which The Birthday Party and The Dumbwaiter are still performed often. From there he continued his threefold theatrical activity on mainstream stages and on the screen. His collaboration with the brilliant director Joseph Losey was perhaps the peak of his film work, as it was for Losey, but it was also characteristic of Pinter’s own theatrical style, which is also well documented in films of his plays, beginning with Clive Donner’s 1963 film of The Caretaker with two members of its original cast, Alan Bates and Donald Pleasance.

As a teenager under the Third Reich and son of an enthusiastic and rising party member of brutal ways, Lothar Berfelde found himself maturing into an especially difficult situation. From a very early age, he had felt himself to be a girl in a boy’s body. Disgusted by Lothar’s precocious effeminacy, his father had forced him to join the Hitler Youth, but eventually a Lesbian aunt enlightened him about cross-dressing and gave him an authoritative book on the subject, Magnus Hirschfeld’s book, Die Transvestiten (1910), which became his Bible, as it reminded him that he was not alone in the world. He killed his father with a rolling pin, as Väterchenthreatened to kill his mother and the entire family. After psychiatric examination he was judged sane and sentenced to four years in juvenile prison. East German society was no more tolerant of homosexuals, but Lothar was able to pursue his inclinations, changing his name to “Lottchen,” formally Charlotte von Mahlsdorf, the Berlin suburb in which he had grown up, and where he continued to live, obsessively collecting furniture and other objects from the Gründerzeit, that is, the age of Bismarck, a period of growing national wealth and security, the “world of assurance” (viz. Am. “insurance”), as Stefan Zweig called it, which was to collapse with the First World War. Charlotte made a name for herself as a preservationist, rescuing old buildings from destruction. She was eventually granted one of them as a home and a site for her private Gründerzeitmuseum, which opened in 1960 and became as much a center of homosexual life as it was a place to enjoy the decorative art of a bygone age. In the basement she preserved the interior of theMulackritze, a notorious gay dive, which was closed by the authorities in 1963. Her way of life, which was far from inconspicuous, and the double-edged function of the museum made it necessary for her to tread a fine line with the powers that be, but she survived and enjoyed major public honors after the reunification of Germany.

The Iraq War is an infuriating abomination and I am more than happy to see anything that attacks it. I am also, as it happens, not against seeing fine theatre. Therefore, I was delighted to see two birds killed with one stone at the National Theatre of Scotland’s production of the Edinburgh Festival hit Black Watch at the Scottish Exhibition & Conference Centre (SECC) in Glasgow, as the play continues its tour through the UK, and then on to North America. [Since its first performance at the Edinburgh Fringe in 2006 in an unused drill shed, Black Watch has played before sold out audiences and won numerous awards, not only the Fringe First, but South Bank Show Award for Theatre, the Critics’ Circle Awards (to John Tiffany as Best Director) and others. It played to sold-out audiences at St. Ann’s Warehouse,Brooklyn in October-November 2007, and will return there in October 2008. – ed.]