In architecture school, the worst criticism a student can receive is an extended silence broken by the comment — “Well,… 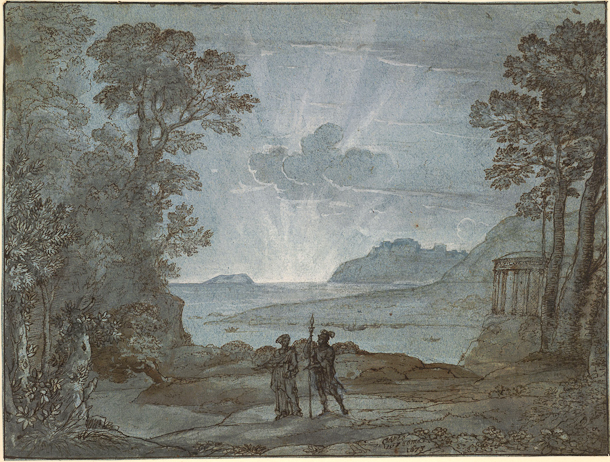 Here in the Berkshires an exhibition of Claude Lorrain, “the Raphael of Landscape-painting,” as Horace Walpole called him, brings his work into especially sympathetic surroundings. The view from Pine Cobble, the steeper faces of Mt. Greylock, or its splendid waterfall remind us readily enough of the grander sights sketched by Claude and his fellow artists on their forays into the Roman Campagna. This natural beauty even nurtures a predilection for landscape, so that local galleries can subsist on landscapes, purveying local views for local walls. Even the Clark is susceptible, if you look over the exhibition schedule of the past few years, in which landscapes or seascapes by Klimt, Calame, Courbet, and Turner have been prominent. Far from cloying, or betraying undue self-absorption, Claude Lorraine: ”The Painter as Draftsman Drawings from the British Museum enhances this harmless local obsession with a comprehensive and coherent view of an artist whose cultural importance is undeniable, however one might discuss his stature as an artist. Claude’s influence has extended beyond art among certain classes of British society, at leastinto the shaping of whole environments and human life within them