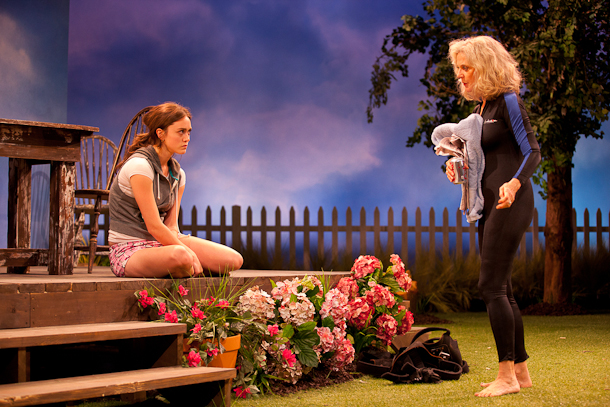 The set of Lucy Boyle’s The Blue Deep, invites us to join Grace Miller at her Sag Harbor poolside, a pleasant enough scene, perhaps in some ways the reduced modern equivalent of the garden terrace of Algernon’s country house in The Importance of Being Earnest. Both of these plays which open the Williamstown Theatre Festival are about leisured families and are set, except for the first act of Earnest, in their comfortable country settings. At least two of Shakespeare and Company’s season openers are about families as well, Parasite Drag, and King Lear. It’s a wonder the Berkshire Visitors Bureau hasn’t started a family-oriented promotion over them. Certainly none of the families on view at WTF are in anywhere near the parlous danger of the unwholesome midwesterners of Parasite Drag. In the one instance where bullets fly, we know they’re only blanks, like everything else in that particular production. In The Blue Deep, on the other hand, there is breakage, first a beer bottle, then a cookie jar. A yet greater peril comes from the Super Glue used to repair the jar.