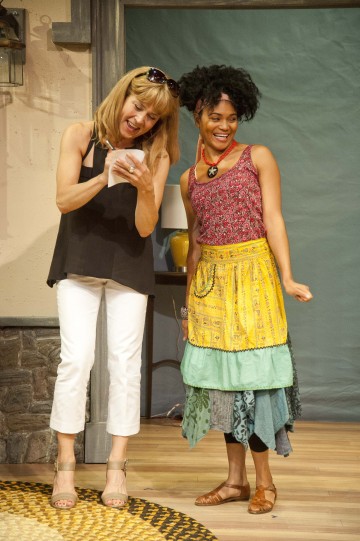 I heard Matthew Penn’s direction of Christopher Durang’s Chekhov play as a collision of energies—almost a rant against reticent Chekhov and his gazing, yearning characters. The play depends pretty much on the performance of Masha, an aging movie actress. Elizabeth Aspenlieder had all that was needed to make this character work.

The Williamstown Theatre Festival got off to a comfortable start with quite an entertaining offering by WTF familiars. Playwright-Actor Christopher Durang has appeared in Williamstown in both capacities. Katie Finneran is beginning her second WTF season as Prudence. Director Alex Timbers and Matt McGrath are both in their fourth season, and Kate Burton, of course, is a fixture, now in her 18th season. Beyond that, there is also an element of nostalgia in Beyond Therapy, which was first produced off Broadway in 1981 and on Broadway in a revised version in 1982. Not everybody will realize what a different place the world was back then. Hence the program notes attempt to explain this through a comparison with Sex and the City, which is steeped in the values of the turn of the century, when it started. Even that is beginning to recede into the past. While the waywardness of psychological professionals is as fresh a topic as any (The Guardian reported just today that Britain’s most famous psychiatrist has been convicted of plagiarism and may lose his license.), Durang’s not-so-young man and woman, Bruce and Prudence, would be facing quite different problems today. They’d more likely be complaining about the latest switch in their medication and talking to their therapists and each other about their relationships with their animals, whether dog, cat, bird, or reptile. Beyond Therapytakes us back to the distant days before cell phones, personal computers, e-mail, and Facebook. This was the tail-end of the sexual revolution, just before people began to notice AIDS; the sixties were still in people’s memory, and the seventies weren’t quite over yet; Reagan’s transformation of American society, whatever that was, had not quite made itself felt yet. As for myself, I lived abroad between 1983 and 1985, and on a visit to New York sometime late in the fateful year 1984, I noticed that people were different. Clothes, assumptions, the way people walked on the street—that is, now looking down fixedly onto the pavement—had all changed.