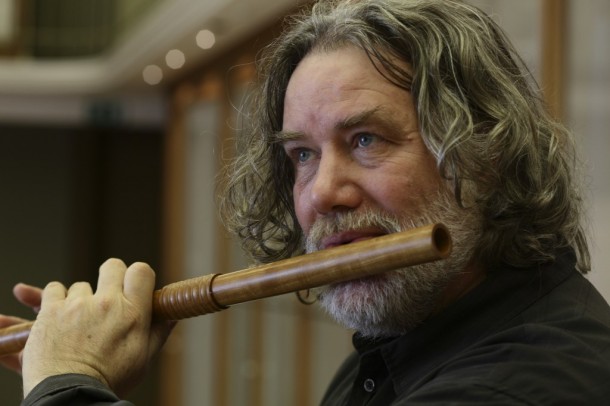 HIP (Historically Informed Performance) is not so hip as it used to be. William Christie does Baroque opera with cutting edge directors. René Jacobs records a Matthew Passion with tempi that rival Furtwängler’s. The information age was what made historically aware performances possible. It did not give us all the answers. In fifty years will we have HIP performances that are more like the 16th or 17th century than they are today? And how will the information we gain then be applied? Will not the actually application of it be indelibly tied to the decade?

Most seem to agree musical historicism can go too far: imagine a Plymouth Plantation-style re-enactment of a concert of Baroque music with the audience coming and going, eating picnics in the gods, a musician wearing a modern watch dismissed as a “farb.” Luckily most musical historicists are more practical and flexible. For this concert the hall lights stayed up, which is a nice touch, even if electrics are not as pretty as the candle-lit halls of days past. Unfortunately, and I assume unintended by the musicians, the audience did come and go in between the first several songs, which not only rudely made the musicians wait but disrupted the flow of the program, and one woman, having missed three or four songs, came clumping down the wood-floored aisle in high-heels making an incredible noise. More cheerfully, Mr Scholl had the audience join in on the refrain of Purcell’s Man is for the Woman Made, which, according to Mr Scholl, is what Purcell intended when he originally composed it, for light relief in the theatre. And it did provide some short refreshing relief among the quite serious music in this program.