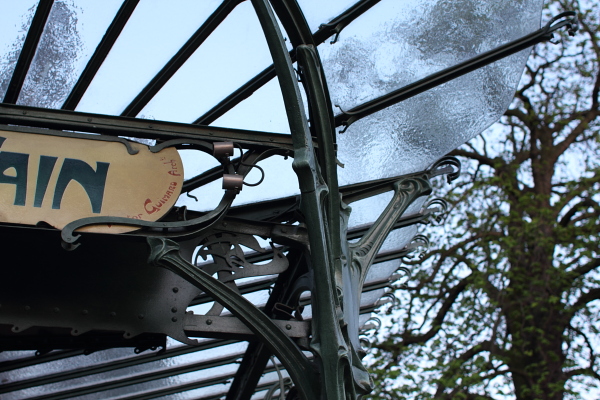 In its shopfronts cashmere sweaters the colors of macaroons. Behind their digicodes its reposing hameaux. In its ballot boxes three out of every four votes for Sarkozy. Hidden in their Maseratis its children dressed in black. The sixteenth arrondissement of Paris is a peninsula between the Bois de Boulogne (which belongs to it) and the Seine; there is the slight feeling of a border crossing, of breaching a feeble forcefield, upon entering or leaving. One can find here the works of Perret, Sauvage and, soon, Gehry, but it is the section of the Earth’s surface with the greatest concentration of buildings by Hector Guimard (1867-1942). The seizième is to Guimard as Oak Park is to Frank Lloyd Wright, except that it contains works from all periods of the architect’s career, from 1891 to 1927. Along the way one passes other buildings which support the contention, inherently arguable and worth arguing, that the sixteenth is the most architecturally interesting arrondissement. Annexed to the city in 1860, the seizième grew up in what we might call, with light apologies to Robert Caro, The Years of Hector Guimard, a complex, under-appreciated and richly contested period in the history of modern architecture. A new eclecticism began to rebel against the last moments of a played-out Haussmannization. Many modernisms were in play. Art Nouveau, which seems barely able to contain Guimard’s work, let alone the output of the entire period, may now seem the stuff of coffee table books, a particularly beautiful dead end, a fashion, a decorative style, but its surviving remnants hint of an influence more spiritual than physical.

For music to make sense, the performer has to be able to display its structure, discover its rhetorical gestures, and properly inflect its musical expression. The performer has to have the understanding, emotional sympathy, and musical ability to do all this. Two of the canonical twentieth century works on this program have offered serious challenges to both performers and audiences: are they arbitrarily constructed to shock and confuse us, or do they make sense? Despite the fact that they continue to raise such questions, both works have become relatively familiar in recent years, and are accepted as modern classics. Arkivmusic.com lists sixteen recordings of the Ives and nine of the Schoenberg; they turn up regularly on orchestral programs. Have audiences gotten to the point where they truly understand these pieces as presented? Have they caught up with Ives and Schoenberg? I think the answer is “not quite.” These remain challenging works, and the extent of the performers’ comprehension remains the critical factor. How well did the TMC Orchestra do under its two conductors? Let’s take each work separately.

If Paris is a city shaped like an onion, formed of concentric rings as fortifications have been demolished and extended, then the site of the new îlot expérimental on Rue Rebière in the 17th arrondissement is the thin membrane just beneath the outer skin. The site is 620 meters long and only 12.6 meters wide, wedged between the Cimetière des Batignolles and the rue itself, which is what one might call a quiet street, or perhaps one too shy or cranky to admit cross-streets. Beyond the cemetery the Périphérique roars along a viaduct while on the other side of the street stands the rather impassive Lycée Balzac, not awful, not particularly inviting. It’s exactly the sort of unlovely site a young architect ought to love, particularly for housing, particularly for the social housing which has now been built here.

Amidst recent debate over whether the “blockbuster” art show is dead, alive, dying, waning or mutating, it takes a blockbuster to appreciate the value of a blockbuster. This is especially so in Australia, whose several fine museums all started collecting way too late to acumulate many of the great masters. As Edmund Capon said in a recent interview, the quirky array of names along the sandstone frieze of the Art Gallery of New South Wales — Raphael, Michael Angelo (sic), Bellini, Titian — are aspirational, a list of all the artists whose works “we don’t have.” He didn’t add that we never will have them, but there is a poignance to that list of names in bronze, a reminder of one “tyranny of distance” which was untraversable at the time of the gallery’s construction and remains so. Whether or not one of Australia’s mining billionaires ever finds the taste and generosity to buy one of our public galleries some minor Titian, Capon, retiring after thirty very successful years as director of the Gallery, can now justifiably brag that he leaves it “full of Picassos.”

There is a type of city, familiar but seductive, which resists writers even as its charms produce no shortage of readers. Paris, of course, is the number one suspect in the line-up. Overwhelmed by the city and its stories, writers run the perilous risk of being reduced to that style which is simultaneously vague and soppy (The American Society for the Promotion of Bad Writing About Venice was founded to celebrate such writing). Paris is too much, always too much, an excess which perhaps demands a microscope rather than an Imax camera. This was George Perec’s approach in his famous Tentative d’Epuisement d’un lieu Parisien, a book as list of all that happens in one little corner of the city. Métro insolite is much more practical, but it too is an attempt to exhaust the inexhaustible.