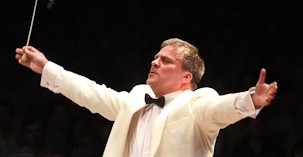 Mark Volpe and his crew deserve a medal for putting together a fine group of replacements for James Levine’s dates in only a few months. Charles Dutoit and Hans Graf are well known to Boston audiences, less so Emmanuel Krivine, and John Storgårds is a total newcomer. His background is especially interesting, given his predilection for mixing up the basic repertory with little known symphonic works from the late 19th and early 20th centuries, for example, Walton, Korngold and Nino Rota, as well as contemporary compositions, like international premiere performances of Rautavaara’s new cello concerto with Truls Mørk and the same composer’s new percussion concerto with Colin Currie, Saariaho’s new clarinet concerto with Kari Kriikku, Gruber’s “Busking” with Håkan Hardenberger and a new Concerto for Orchestra by Rolf Wallin. Before studying to become a conductor John Storgårds was concert master of the Swedish Radio Symphony Orchestra during Esa-Pekka Salonen’s tenure, and he continues to perform as a virtuoso violin soloist, a fact that has special relevance to his work in the Sibelius Violin Concerto at Tanglewood. He is currently Chief Conductor of the Helsinki Philharmonic Orchestra and Artistic Director of the Lapland Chamber Orchestra, and makes frequent guest appearance with major orchestras of Scandinavia, the UK, and Germany, as well as Australia, Japan, and so far in the US, the Cincinnati Orchestra, where he was immediately invited back. I shouldn’t be surprised if that happened in Boston as well. John Storgårds is a conductor of authority and a profound knowledge of the scores he conducted. In a way, it’s too bad that we didn’t get a chance to hear him in one of his trademark mixed programs, but in this one Storgård had a chance to show his personal sympathy for the music of his national composer and his own highly individual way of projecting it through an orchestra, every bit as rugged and uncompromising as the music itself.

The Boston Symphony began the new year with a reduced ensemble, brilliantly conducted by the early music specialist Ton Koopman. The orchestra didn’t attempt gut strings or period winds and percussion in any way, but the players responded intuitively to Koopman’s brisk tempi and sprung phrasing, resulting in a satisfyingly vigorous, if not quite revelatory Haydn Symphony No. 98, the last of his first set of Salomon symphonies, followed by Yo-Yo Ma’s exuberant, somewhat exaggerated performance of Haydn’s Cello Concerto in C, a most welcome and impeccably played symphony by C. P. E. Bach, and a very beautiful Schubert “Unfinished,” limpid in texture and phrased with fine taste and feeling. I’ll say more about this in the context of Alan Gilbert’s almost simultaneous concert, which also paired Schubert’s Eighth with a Haydn symphony of an entirely different kind.