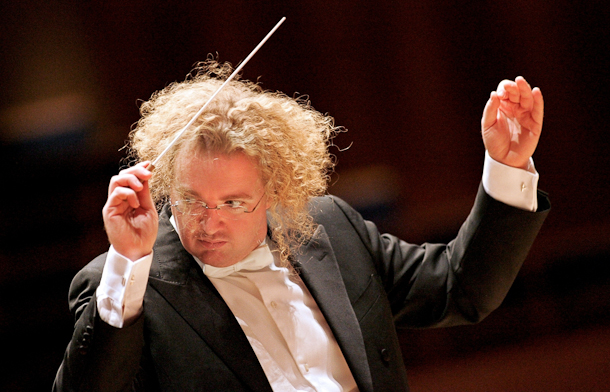 The Philadelphia Orchestra’s season at the Saratoga Performing Arts Center, a distinguished tradition which has continued since its opening in 1966, began most splendidly with a Tchaikovsky-Rachmaninoff program led by Stéphane Denève with Garrick Ohlsson joining him for Tchaikovsky’s First Piano Concerto. This was my first visit to SPAC, so I’ll have to discuss what I heard in the context of the Center’s remarkable acoustics. Designed to seat 5200 people, the Center is slightly larger than the Music Shed at Tanglewood, but it has a surprisingly intimate feeling to it, as one traverses the grounds and descends the grassy slope, where the picnicking crowd can sit and hear the music very well—without amplification, as far as I could see or hear. It is only when one actually enters the hall and sees the orchestra dwarfed in the two-story space that one realizes just how vast it is. The stage is deep, and that has its own effect on the sound, making for a sense of spaciousness and, well, depth, which creates a rich semi-independent back-space for the winds, brass, and percussion. This interacts most impressively with the forward wave of the strings. In general the sound is bright and clear on the top without ever seeming harsh or wiry.

The very short apotheosis at the end of Humperdinck’s “Hansel and Gretel” at Hubbard Hall made me think of confluences — the building, the performers, the audience. All of these were here in a gentle and honest synch. It was the most evenly cast opera I have heard in this venue. The staging was honest. The two singers in the title roles were convincing in the simplest way. They looked right, and they sounded right. In the dream sequence, which no staging can match, director Dianna Heldman brought to me a naturalness which was moving in its humility and acceptance of the place in which it was performed. The old hall itself seemed an ideal house for this reality. Nothing which Alexina Jones and Kara Cornell did as Gretel and Hansel was prolix. There was no fake childishness. Humperdinck could be said to have produced an adult’s version of what childhood is- simple tunes, good things to eat, etc. I suppose when compared to “The Magic Flute”, an opera which really is childlike, this is true. But this dead-honest production and its raptly attentive audience in the golden light of the hall made it seem a miracle. There were no weak links on stage, and there were no false steps in the staging. It was great.