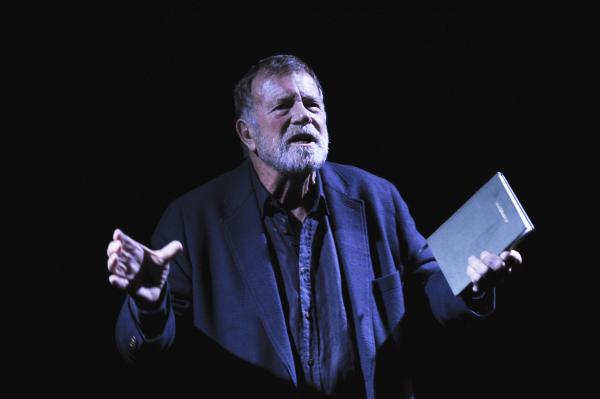 It is no easy task to stage a radio play, or even a “Play for Voices.” We’re not talking about, say, making a dreadful Hollywood movie, or even a schlocky 1950’s film of War of the Worlds; in Under Milk Wood nothing happens. That’s not so much even the main difficulty, though, as is presenting something to the eye which complements Dylan Thomas’ “prose with blood-pressure,” an actor’s doing things — or choosing to stay immobile — and creating activity in a sensible way without stepping on the imagination’s toes. Something similar goes for the cooperative efforts of the costume, set, and music. One way might be to make a sort of symphonic concert out of it, in three movements: night, day, and evening, the actors using their voices mainly with minimal secondaries of costume, gesture, lighting and music, a verbal analogue to a recital or concert. The other extreme might be to turn it into a ‘proper play,’ with with changing sets of Coronation Street